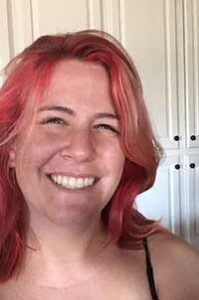 “We have to continually be jumping off cliffs and developing our wings on the way down.”
— Kurt Vonnegut

Jamie grew up in California and attended Harvey Mudd College where she studied general engineering. While at Harvey Mudd, Jamie was the chair of the Social Committee and served as “dorme” (it’s a nerd thing, not a misspelling) president. After graduating, she went on to get her MS in Nuclear Engineering from Penn State. While there, she did post-grad work at the university but found herself missing that California sunshine. Once in San Diego, she joined the Hammer Prep team where she has been happily employed for the last 8 years! When she isn’t convincing students math is fun, Jamie enjoys teaching jewelry making at Idyllwild Arts’ Summer Program, playing video games, and cooking (though she’s a fan of pineapple on pizza, so we aren’t sure she can be trusted in the kitchen). She’s also doing her best to create a small farm at her house: 4 cats (Mao, Stalin, Toupee, and Bader), 4 chickens (Jar Jar Beaks, Nasturtium, Roof, and Jean-luc Peck-ard), and multiple fish (she could use some name recommendations for them, so please feel free to share your ideas).

Back to tutor page
Page load link
Go to Top