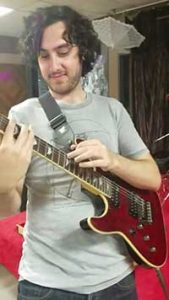 “What’s your favorite idea? Mine is being creative!”
– Paige the Notepad

About Itamar
Itamar grew up in San Diego, California and attended the University of California, Berkeley  where he studied Molecular & Cellular Biology with an emphasis in Genetics. While there, he conducted research into epigenetic silencing in saccharomyces cerevisiae (that’s a fancy word for very not-fancy yeast) and was a lead instructor of a student-led class on Stem Cells, their modern day technological applications, and their use in society. After graduating, he spent “the best 6 months of his life” bumming on his dad’s spare couch and attempting to start a pop-punk band (his words, not ours) before joining a local biotech startup specializing in precision oncological medicine where he spent over 2 years. In his spare time Itamar enjoys noodling on his electric guitar, writing music, working on his prospective standup career (we truly wish him the best of luck), playing chess, reading dystopian sci-fi, and listening to math-rock (we’re still looking into whether this is something that actually exists).

Back to tutor page
Page load link
Go to Top